by Jarvis Dobrik
in Business Moguls
0 0

Daymond Garfield John who is popularly known as “The People’s Shark” for his role in ABC’s  Shark Tank reality show is an entrepreneur, investor, author, television personality, and a highly sought out motivational speaker.  He is the founder and CEO of FUBU, a lifestyle brand that is especially dominant in the global fashion industry.

Read along to know more about Daymond John.

The early life of Daymond John

Daymond John hails from humble beginnings, he was born on 23rd February 1969 in Brooklyn, New York City. He had somewhat of a rough childhood as his parents divorced when he was only 10 years old. This pushed him early into entrepreneurship. 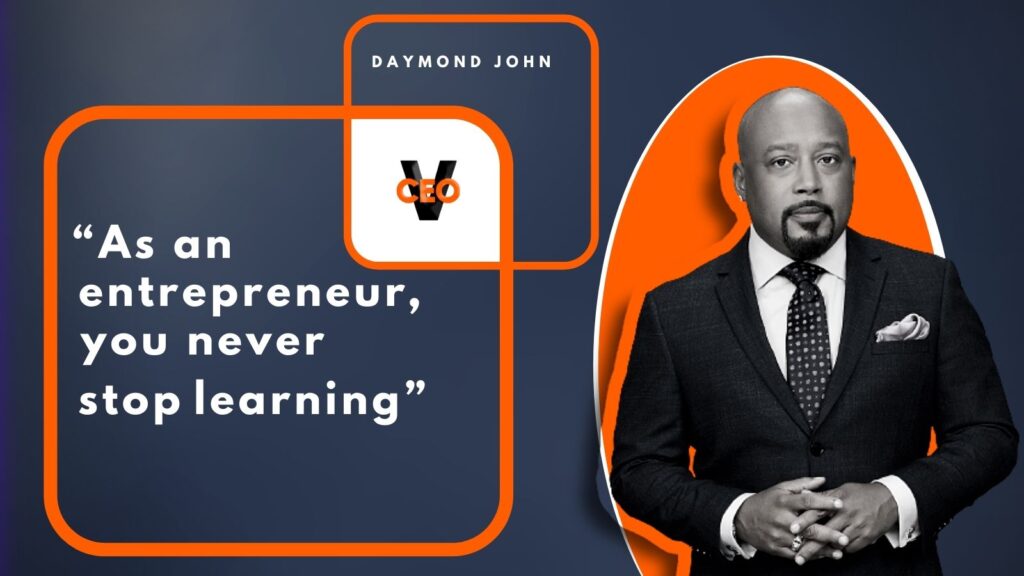 He sold second-hand cars and pencils to be able to afford his education. Luckily for him, he was enrolled in a school program that made it possible for him to work a full-time job` and still further his studies. He attended Bayside Highschool in Queens, New York.

A not-so-well-known fact about Daymond John is that he was dyslexic. This contributed to him losing interest in pursuing further studies.

Daymond graduated back in 1992 after which he started his own commuter van business while also waiting tables at Red Lobster.

FUBU, an acronym for “For Us, By Us” was John’s idea. Back then wool ski hats were very trendy. As an entrepreneur with an American dream of success, he noticed a gap – the wool skis were expensive. He started making the hats in his mother’s house to sell them in concerts and around his neighborhood. Though just starting, and as a small business owner, Daymond John once made over $800 in a single day from selling the hats in 1992! To increase production, he recruited his next-door neighbor to help him with the sewing.

His mother was also very supportive of the venture, she not only allowed him to run his business in her house but also provided the initial funding by mortgaging their house. His mother placed an outstanding ad campaign in the newspaper that saw FUBU get a huge deal with Samsung textiles. After realizing that the business was taking off, he decided to try out printed t-shirts. This was a great idea as the t-shirts were also selling fast.

John recruited two of his long-time friends, Keith Perrin and Alexander Martin to help him in the production and running of FUBU. John got his big breakthrough in 1993 when he was able to convince LL Cool J who was a cool rapper back then to wear his merchandise.

LL Cool J also put the tagline “For Us, By Us” in his music which was another outstanding ad campaign. After this, the demand for his products skyrocketed. Since then, FUBU has grown to be a renowned global brand with over $6 billion worth of global retail sales. It has also given birth to both the FUBU foundation and FUBU entertainment.

Daymond John and the Kardashian’s

In the period between 2001 and 2007, Daymond Garfield John worked closely with the Kardashian family on the show ” Keeping Up with The Kardashians “. His major role was product placement. At the time it was a challenging task since the show was new and no brands wanted to be associated with it. This helped him with entrepreneurial insights that helped him grow his brand. He was forced at times to pay for his own brand FUBU to be featured on the show.

To begin with, he had an existing contract with the Kardashians and could not go back on his word. Luckily for him, Khloe Kardashian discovered his conflict of interest and conveniently “fired” him.

Secondly, the idea that he would use his money at Shark Tank did not sit well with him. However, after consideration and coming to a realization that most of his clothing companies were struggling, he decided that Shark Tank was the way to go.

John was an instant people’s favorite on the show, hence his name “The People’s Shark”. He has up to date invested in numerous projects. His most notable and profitable investments from Shark Tank’s show include:

Three Jerks Jerky is a company that makes filet mignon beef jerky. The founders Jordan Barrocas and Daniel Fogelson made their pitch during the 7th season of the show. They were looking for 100k bucks in funding for 15% equity in their business.

Daymond John liked their idea because of a childhood memory of his mother saying, “You can never have too much hot sauce or beef jerky in the house.” As of 2021, the Three Jerks Jerky are successful and have their products in over 3000 stores in America.

Bubba’s Q Boneless Ribs is a catering business started by famous football player Al “Bubba” Baker and his wife. They pitched their idea back in 2013 on ABC’S ‘Shark Tank. They were asking for 300k bucks for 15% of their company.

John, who was impressed by their business model, gave them a counteroffer of 300k but with a 30% equity and a licensing deal. Even though the couple had already invested so much into the business, they agreed to the terms.

According to ESPN, as of 2017 Bubba’s Q Boneless Ribs had over $16 million in sales.

The story behind The Shark Group

Daymond John started the Shark Group in 2005. It is a management and branding consultancy firm. It is simply a group of visionary entrepreneurs who have come together to find better solutions and improve in the ever-growing entrepreneurial world.

Next Level Success is a startup program that aims to educate business owners and entrepreneurs on the best brand strategy needed to run successful brands in the modern world. It was originally known as Daymond John’s Success Formula.

Daymond John has become a keynote speaker and works with celebrities and brands to provide entrepreneurial insights on ways to create additional revenues. He also offers free global live stream celebrations on black entrepreneurs day where he gives keynote speeches. This global entrepreneurship program features black business leaders and superstars who are meant to impact the audience members positively.

John is also a big and open supporter of the BLM movement and the  LGBTQ+ community. This is seen by how he supports businesses owned by black people and how he often shares his opinions on how racial and sexual inequality can be eliminated. In an interview by CNBC, John said that CEOs should listen unbiasedly to their employees.

He was named as the presidential ambassador for global entrepreneurship in 2015 by former President Obama.

What is Daymond John’s Age?

What is Daymond John’s height?

Yes! Daymond John is married to Heather Taras, an entrepreneur, and media personality. The two got engaged in 2016 where Daymond proposed on the set of one of the episodes of Shark Tank. Two years later in 2018, they got married in a private ceremony.

Does Daymond John have kids?

Yes! Daymond John has three children, daughters to be precise. Yasmeen John and Destiny John are from his former marriage while Minka Jagger John is his third kid from his marriage with Heather Taras.

What is Daymond John’s net worth?

As of January 2021, Daymond is said to be worth around $350 million. He has accumulated his wealth from FUBU as the founder and CEO. He has also made numerous investments in the ABC Reality Show “Shark Tank”, which had millions of weekly viewers.

Is FUBU still a thing?

Yes! FUBU is still a renowned American clothing brand that continues to grow even to date. Thus one among successful brands out there, As of 2021, it is worth about $8 billion [SOURCE].

Is FUBU made in China or Bangladesh?

According to Ethicaloo, FUBU products are mainly made in China, India, Vietnam, Korea, and Pakistan.

Was Daymond John fired by the Kardashian’s?

Yes, but in a good way. Khloe Kardashian fired Daymond John to allow him to sign a contract with the show Shark Tank. This was because the terms of his contact with the Kardashian family prohibited him from working with other brands.

Unfortunately, “The People’s Shark” had to leave the show because he was diagnosed with thyroid cancer. He stated in an interview that the move was to allow him to take care of his health as well as to spend more time with his family.

Does Daymond John still own FUBU?

Yes! FUBU was originally and still is to date, owned by Daymond John, Alexander Martin, Keith Perrin, and Carlton Brown.

In the beginning, FUBU was “Five Urban Brothers United” but was changed in 1992 to “For Us, By Us”  in a bid to promote the brand.

"The toughest thing about running your business that isn’t talked about enough is your time." Elizabeth Gore Tweet Elizabeth Gore,...

Gil Villavecer: The Face of Frontier Dental Lab Group and its Mission to Improve Smiles

Smart Career Choices – How a Lateral Move Can Boost Your Career