With a net worth of $120 million as of 2021, Dave Portnoy famously known as El Presidente is a widely known sports media American Celebrity. Barstool founder Dave has a huge following on his Instagram, Facebook, and Twitter accounts and I bet you have heard about him. His love for betting and gambling highly contributed to the founding of Barstool Sports, the most engaging blog that covers the latest news and highlights related to sports and pop culture.

Dave Portnoy also has a pizza review youtube channel where he loves to review pizza from as many restaurants as he can. For his show, One Bite Pizza on Youtube, you get to see Dave eat one pizza per day, which he has done for over two years.

Dave Portnoy’s love for sports began at a very young age. He used to play both football and baseball in Swampscott High School where he studied. In college, he didn’t play much despite joining the world’s greatest college known for sports, The University of Michigan. He graduated with a degree in Education and worked at Yankee Group for about 4 years before founding his company, Barstool Sports, in 2003 in Milton, Massachusetts.

Having realized a gap in the market related to sports betting, Dave Portnoy was determined to fill that gap. The internet, in 2003, was not as it is now and so he began by producing a local Boston Newspaper that featured sports bets. His childhood friends would help him write articles for the newspaper under pseudo accounts, making them seem like they had multiple writers. They would spend over 10 hours a day writing content for the local paper. 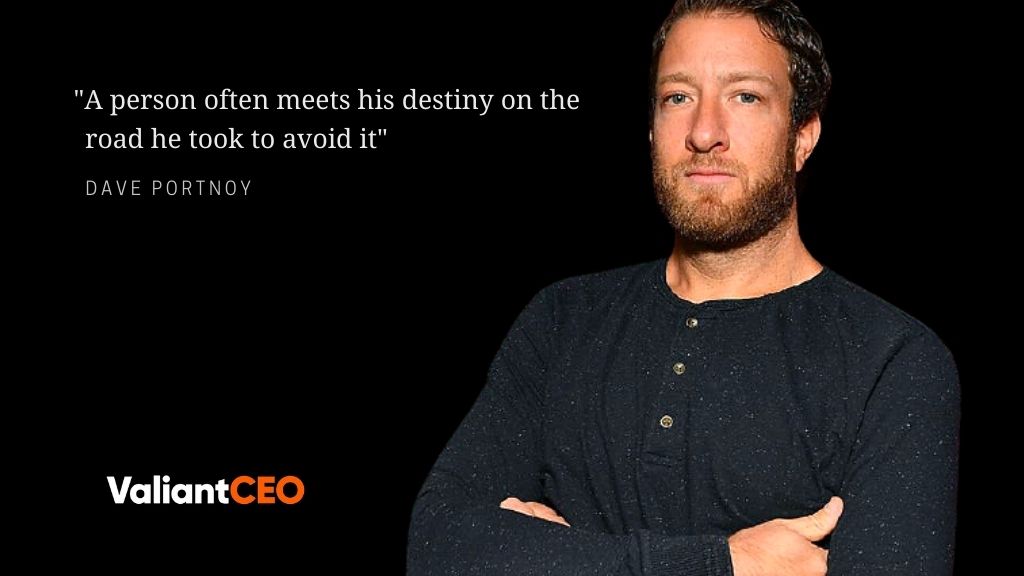 By the year 2007, the local paper had experienced immense growth and therefore Dave Portnoy decided to move into the online space. This was a wise decision as they even gained higher traffic from all over the world. Up to date, Barstool receives up to 1,000,000 visitors a month on their website with their best performing year being 2016 where Forbes reported that the company had an average of 8 million unique visitors in a month.

As of the last year 2020, Barstool Sports ranked 1072 in the US Rank and 5582 in the global Alexa Rank, which is great. Despite the competition from other betting sites, Dave attributes the success of Barstool Sports to the concept of “Doing what you love”. He says that if you do what you love then you will be able to wake up every day motivated and energized to chase your vision, that is what keeps him and the company at large going.

Over the years, Barstool Sports has believed that CSR isn’t a particular program, it is what they do every day, maximizing positive impact and minimizing negative impact.

Barstool Sports raised $240,000 for the victims of the Boston Marathon Bombings attack and $150,000 to the family of the police officer from Massachusetts who was killed on duty.

In 2018, Barstool Sports partnered with Baker Mayfield, an NFL quarterback to release a clothesline whose proceeds would benefit the Special Olympics in Ohio.

In 2019, Dave Portnoy led a fundraising campaign towards mental health and specifically, PTSD,  which ended up raising $91,000.

Lately, in 2020, Barstool Sports launched a non-profit fundraising fund which has so far raised over \$35 million while engaging over 200,000 people in the contributions including celebrities such as Tom Brady, Elon Musk, Kid Rock, and Aaron Rodgers. The Barstool Fund has a mission of raising money for owners of small businesses (including restaurants) in the US who have been affected by the Covid 19 pandemic.

By the end of 2020, $12 million had been raised to serve different people in the society.

Barstool podcasts have ranked highly because of the large audience and massive social media following. Podcasts such as Pardon My Take, Call Her Daddy, The Kirk Minihane Show and many more have topped the podcasts charts for years.

Renowned athletes, comedians, and bloggers such as Alex Rodriguez, Ryan Whitney, Willie Colon, James Duke, Will Compton, and many more guys also have a podcast that features on the Barstool Sports Websites.

Barstool Sports also showcases on its site the Rough and Rowdy show which is an amateur boxing league in West Virginia through pay-per-view events.

Barstool’s Dave Portnoy faced controversy when he was accused of misogyny and toxicity as one of the podcasts promoted sexual harassment, However, he brushed off the backlash he received when he said his site was only a comedy site and should not be put in the same standard with a news site. `

In September 2020, Barstool Sports thanks to Penn National Gaming launched a sportsbook which is a mobile application for betting only available at the moment to residents of Pennsylvania.

Be on the lookout for upcoming news as the company aims to extend its services to other states.

WHAT HAPPENED TO BARSTOOL RADIO 85?

Barstool Radio 85, which was a subsidiary of Barstool Sports, was a channel on Sirius XM. It had operated for 4 years from January 2017 to January 2021, but the contract due to unknown circumstances to the public could not be renewed.

Barstool Sports has however launched a new segment on the radio called Barstool Sports: Picks Central which has been operational from February 2021 in which sports betting is discussed in depth.

Barstool Sports is also seeking to air games online on their site.

Who is the CEO of Barstool Sports?

Erika Nardini, who was the former Chief Marketing Officer of AOL is the CEO of Barstool Sports. She has been the CEO since July 2016.

Barstool Founder, Dave Portnoy is no longer the CEO of the company but is the Chief of Content as he manages the podcasts and blogs posted on the site.

How much did Dave Portnoy sell Barstool Sports for?

In 2016, Barstools Sports decided to seek outside investments and sold a 51% stake to The Chernin Group(TCG) which is a private equity investments firm based in California, America that invests in companies that define cultures such as Barstool, Tumblr, and Pandora. Barstool sold the stake to TCG at around 10-15 million dollars and immediately moved its headquarters to New York City.

What percentage of Barstool Sports does Dave Portnoy own?

Dave Portnoy and other few executives own 13% of the company as that is what remained after selling 51% to The Chernin Group and 36% to Penn National Gaming.

Ellie Schnitt had a podcast known as The Schnitt Talk which was programmed on the Barstool Sports Website. She hosted it together with Alanna Vizzoni until September 2020 where it was canceled due to her departure.

There are many controversies regarding her departure, but according to Ellie, she left to look for greener pastures careerwise.

Her co-host however did not leave Barstool but has been working on several projects with the company.

Does Big Cat own part of Barstool Sports?

Dan Katz who is famously called Big Cat was among the very first content creators of Barstool Sports. He has seen both the highs and lows of the company.

During the 51% sale of stake to The Chernin Group, Big Cat launched his podcast “Pardon My Take” which has grown tremendously and has ranked among the most downloaded sports podcast in the US.

Around the same time, many controversies regarding rape comments, copyright issues, and nude photos built up about Barstool Sports causing a show which the Big Cat was to host on ESPN known as ‘Barstool Van Talk’ to be canceled.

How many employees do Barstool Sports have?

Barstool Sports is a private company based in New York. It has about 150 employees. According to Zippia, which is a company that analyzes companies and their human resources, on average, employees at Barstool Sports work for the company for approximately 1.1 years.

Barstool Sports loves to hire graduates from the University of Kentucky as about 13.3% of its employees are graduates of the institution.

Did you know that Mike Kerns who is the president of The Chernin Group Digital met Barstool Sports Founder, Dave Portnoy, through a friend who was a former University of Kentucky quarterback, Jared Lorenzen? Could we say that is where the love for the graduates of the university began?

How much money do Barstool Sports employees make?

Here is an approximate figure of salaries of employees at Barstool Sports according to Chad Wyrink of Against The Points :

The exact amount of salaries of Barstool Sports employees is not known. However, for a company that makes millions of dollars in revenue, then you know that their employees are paid well.

Click here to check out Barstool Sports Website and be up to date on matters related to sports and pop culture.

Despite being apolitical, one of the major highlights of Dave Portnoy’s career as the founder of Barstool Sports is when he got to interview Donald Trump, the former president of the United States of America. Dave interviewed Donald Trump on July 23, 2020. Trump confessed that his son was a huge lover of sports and follows news keenly from Barstool Sports and was interested to know the person behind it.

What is Dave Portnoy’s height?

Dave Portnoy is 6 feet 2 inches tall which is approximately 188 cm.

Yes, Barstool founder Dave Portnoy still trades. However, he has been expanding his horizons beyond sports gambling and the barstool brand and into day trading as of 2021. It has not been easy for him as he has lost over $740,000 but the Barstool brand owner encourages everyone to only trade what they are willing to lose. Portnoy’s account for trading has equally earned profits.

No, Dave Portnoy is a divorcee. He had a wife from 2009-2017, Renee Satterthwaite who is a businesswoman. They had no kids together.

Dave Portnoy is however rumored to have a young girlfriend Silvana Mojica who is in her late 20’s. They even have matching tattoos.

What happened between Dave Portnoy and Michael Rapaport?

Dave Portnoy has over 2.6 million followers.

The Pandemic Stimulus Was Front-Loaded. That Could Mean a Bumpy Year.

The Pandemic Stimulus Was Front-Loaded. That Could Mean a Bumpy Year.

What to Choose: Is Angular Better than React?

Angular or React? Have you asked yourself this question? It usually occurs in two cases: or when there is a...

Factors to Evaluate When Buying a Back Cushion