New York City will cut business ties with the Trump Organization, becoming the latest in a series of partners to dump the president and his family empire following last week’s violent insurrection on Capitol Hill.

“The city of New York will no longer have anything to do with the Trump Organization,” Mayor Bill de Blasio said on Wednesday, arguing that Mr Trump’s role in inciting a mob to storm the Capitol building as Congress was certifying Joe Biden’s election victory provided legal and moral justification.

“The lawyers looked at it. It was clear as a bell: that’s grounds for severing the contracts,” Mr de Blasio said.

The Trump Organization has contracts to run two skating rinks and a carousel in Central Park, as well as a golf course in the Bronx. The deals generate about $17m a year for the company, according to Mr de Blasio.

While the financial figures may be modest, the skating rinks carry particular symbolic value for the Trumps. The president took over the renovation of the dilapidated Wollman rink from a cash-strapped city in the mid-1980s. His ability to refurbish the rink, in the shadow of Midtown’s skyscrapers, ahead of time and under budget was a publicity coup.

In a statement, Eric Trump, the president’s son who is helping to steer the family’s business, said the city had no right to end the contracts, and would owe the Trump Organization $30m if it did so. “This is nothing more than political discrimination and we plan to fight it vigorously,” he said.

Mr de Blasio’s announcement came as the Democratic-controlled House of Representatives opened proceedings on Wednesday to impeach Mr Trump for his role in last week’s insurrection, which resulted in five deaths after thousands of the president’s supporters ransacked the seat of American democracy. That event has prompted shock and outrage — even among many, but not all, Republican politicians who had been close allies of Mr Trump.

In the aftermath, political donors and businesses have moved to distance themselves from the president and the Trump Organization. That poses a threat to a property empire that was already struggling because of the stigma attached to the Trump brand and a historic pandemic that is devastating hotels, retail and office properties across the country.

Cushman & Wakefield, one of the largest US commercial property brokers, informed the Trumps on Tuesday that it would no longer work with them. The firm has served the family for decades, leasing its properties at 40 Wall Street and Trump Tower, among other assignments.

“Cushman & Wakefield has made the decision to no longer do business with the Trump Organization,” a company spokesperson said.

The Trump Organization was said to be reaching out to other parties on Wednesday to gauge their interest in representing their New York properties.

Even before the insurrection, the company was struggling to attract US companies to its commercial properties, according to brokers, forcing it instead to rely on foreign tenants. Some are predicting the Trump Organization could face a wave legal action from tenants that may find themselves unable to sublease the units they bought or rented in Trump properties because of the association with the president.

“There’s going to be litigation to follow,” one broker said.

The Trump Organization has at least $1.1bn in debt, according to government financial disclosures, about $900m of which will come due over the next four years. Much of the debt is backed by buildings and golf courses. 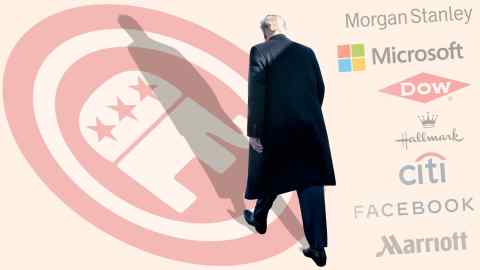 The Professional Golf Association began the flight from Mr Trump when it announced it would move the 2022 PGA Championship from the president’s club in Bedminster, New Jersey, citing the risk to its brand. Mr Trump, an avid golfer, had spent millions of dollars to host what would have been his first golf major in hopes that it would cast a lucrative halo over the club.

Two banks that have long worked with the Trumps, Deutsche Bank and Signature Bank, followed suit, saying they would end their relationships with Mr Trump. Deutsche became Mr Trump’s lender of choice, funding hotels and golf courses, after other US banks cut him off following a series of bankruptcies. Signature once counted Ivanka Trump, the president’s daughter, as a member of its board.

Mr Trump’s property business, which gave rise to the reality television career that eventually launched him into politics, is built around a brand that is meant to signify opulence and success.

Yet the Capitol attacks have tarnished it in recent days — so much so that he was unable to persuade Bill Belichick, the coach of the New England Patriots football team, to accept a Presidential Medal of Freedom from him.

“Above all, I am an American citizen with great reverence for our nation’s values, freedom and democracy,” Mr Belichick said in a statement, as he declined the president’s offer.

How to use React functional components