Biden to push $1.9tn stimulus for pandemic-battered US economy

Joe Biden will ask Congress to spend $1.9tn on an economic rescue plan, including new direct payments to Americans, aid for state and local governments and more funding for the coronavirus pandemic response.

The plan, outlined by senior officials from Mr Biden’s incoming administration, will be announced by the US president-elect in a speech on Thursday night, setting it up as a top legislative priority when he enters the White House next week.

If enacted, the package will deliver a further jolt of fiscal stimulus to the struggling US recovery, after a $900bn package agreed last month by US lawmakers and $3tn in relief passed at the start of the pandemic.

The push from Mr Biden comes as he tries to shift attention back to the economy and the Covid-19 crisis just a day after Washington was consumed by President Donald Trump’s second impeachment for inciting a deadly assault on the US Capitol on January 6.

On Thursday morning, concerns about the state of the US recovery resurfaced after an unexpected jump in first-time weekly claims for jobless benefits, adding impetus to Mr Biden’s calls for fresh stimulus.

The plan released on Thursday is expected to mark the first step in Mr Biden’s economic response to the coronavirus downturn, with additional recovery measures to be presented as early as next month.

The second stage of Mr Biden’s economic agenda is expected to call for longer-term spending on infrastructure, green energy and education, to be funded at least partially by higher taxes on the wealthy and corporations.

$350bn – Extension of emergency jobless benefits of $400 per week

Source: Analysis of plan by Committee for a Responsible Federal Budget

Democrats in Congress are widely expected to back the stimulus. Mr Biden’s party already has a majority in the House of Representative and is set to clinch control of the Senate in the coming days after winning two races in Georgia earlier this month.

The incoming president is also hoping to secure support from some Republicans. The level of backing for the stimulus will be an early test of his ability to deliver more legislative unity on Capitol Hill after the tensions and divisions of Donald Trump’s presidency.

Mr Biden’s $1.9tn plan, which will be entirely financed by new borrowing, includes a new payment of $1,400 to most Americans, supplementing the $600 cheques recently received by individuals earning less than $75,000 per year. That would bring the total value of recent direct payments to $2,000, the level backed by both Mr Trump and Mr Biden in recent months.

It includes a $400 per week extension of emergency unemployment benefits until September, preventing a cliff-edge in support for the jobless that would have happened in March.

There will also be a $350bn cash infusion for budget-strapped state and local governments to prevent lay-offs of public sector workers, a priority for Democrats that has been long-resisted by Republicans. 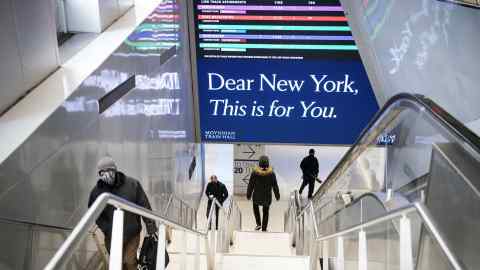 A further $50bn will be set aside for grants and loans to struggling small businesses, on top of the Paycheck Protection Program established during the pandemic to prevent small business failures, which was recently replenished by Congress.

A big component of Mr Biden’s rescue plan is $400bn of new spending to tackle coronavirus, including $160bn for testing and tracing, as well as a national vaccination programme that could help the administration meet its goal of inoculating 100m people within its first hundred days.

Also in the mix is $130bn to accelerate school reopenings across the country.

The president-elect is also expected to call for Congress to increase the federal minimum wage to $15 per hour, a Democratic priority for many years that is backed by labour unions.

And he will push for an extension of a federal moratorium on evictions and foreclosures until September, while providing $30bn in assistance for Americans struggling with rental and utility payments.

5 Digital Advertising Tips That You Need to Know